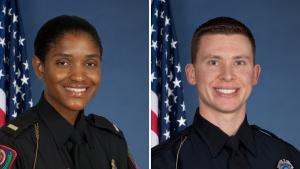 “After conducting a national search it was clear that the right choice for Deputy Chief was Lt. Spears-McNatt,” said OSUPD Chief Craig Stone. “She is an exceptional law enforcement professional who has been committed to Ohio State for more than 20 years.”

Spears-McNatt (pictured left) is a member of the National Organization of Black Law Enforcement Executives and was appointed to the Ohio Private Investigation and Security Services Commission by Gov. John Kasich in 2015. During her time with OSUPD, she’s received several honors, including a Commendation Award and a Medal of Valor.

Spears-McNatt received her bachelor’s degree in Criminal Justice from Ohio State and went on to earn her master’s from Franklin University. She has received training from the Police Executive Leadership College and has received several certifications, including one as a Rape Aggression Defense (R.A.D.) instructor. She currently supervises the R.A.D. program at Ohio State and is also a member of the Crisis Intervention Team. Spears-McNatt has also received extensive training in areas ranging from criminal investigation to homeland security.

“I started my career at Ohio State and have enjoyed coming to work every single day for the past two decades,” Spears-McNatt said. “It is truly an honor to be named deputy chief and to continue making safety a priority for our diverse population of students, faculty, staff and visitors.”

Yankanin’s promotion to lieutenant will also be effective Friday, August 26. The fellow Ohio State graduate has been with the university since 2003. During his time with OSUPD, Yankanin has served as a R.A.D. instructor and a member of the division’s Special Response Team. He is a certified instructor in firearms, first aid, CPR/AED (automated external defibrillator) and has served as a field training officer for newly hired police officers.

A formal pinning ceremony will be held August 26 at 2:30 p.m. in Blankenship Hall to recognize both officers. Spears-McNatt fills the deputy chief role formerly held by Stone, who was promoted to chief in June 2016 after serving as the division’s acting chief for approximately one year.