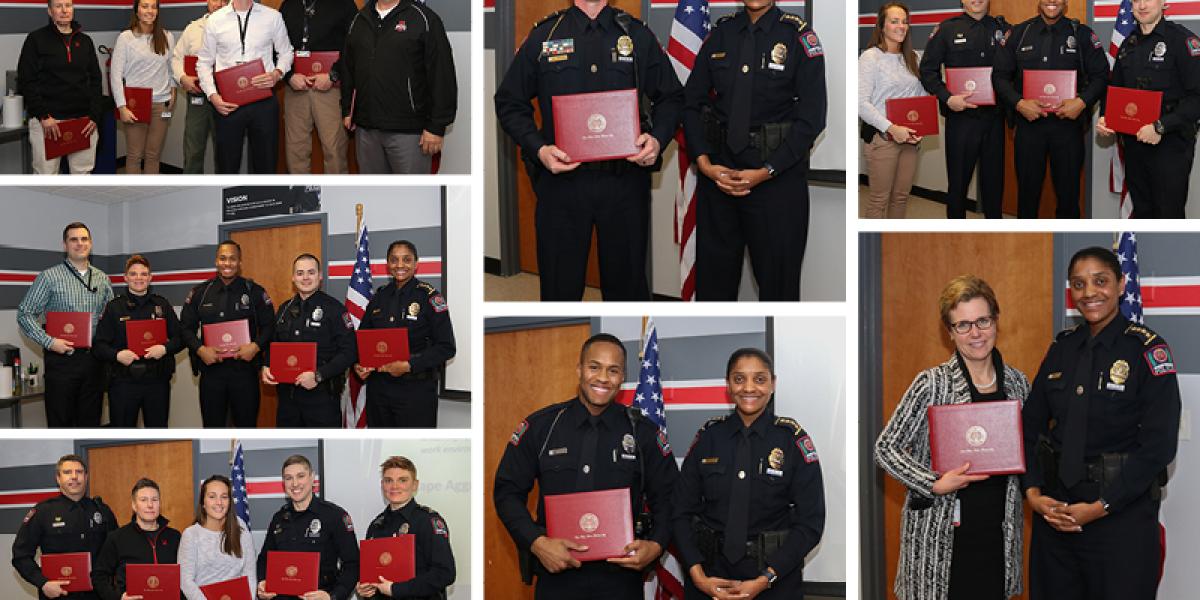 The Ohio State University Police Division (OSUPD) is committed to enhancing safety for the campus community. As a university agency, servicing a college campus that is home to nearly 100,000 students, faculty, staff and visitors, OSUPD has a uniquely tailored approach focusing on both safety and education.

On Tuesday, March 5, 2019, OSUPD honored a select group of officers that exemplify what it means to serve, protect and educate at Ohio State. Below is a full listing of the police division’s annual awards and honorees.

Officer of the Year Award – Officer DeRon McIntyre
Officer McIntyre is a member of the Special Response Team and Defensive Tactics Team. He consistently performs his duties in a professional manner and ranks in the top three in every measurable statistic for evening watch. He proactively uses his uncommitted patrol time to do foot patrols and traffic stops. He also volunteers for community outreach programs, such as ride-alongs, Citizen Police Academy and other programs. Officer McIntyre is a positive influence on his fellow officers. He mentors new officers, and he always exhibits a positive attitude at work.

Supervisor of the Year Award – Lieutenant Brandon Yankanin
Lieutenant Yankanin serves as the Ordnance Team Supervisor and Field Training Supervisor. He put eight new officers through field training. Despite this tremendous amount of work, he handled it with ease and a positive attitude. Throughout 2018, Lt. Yankanin volunteered to work supervisor assignments during the football season and other large events. He is dedicated to his job and to the campus community.

Commendation Award – Chris Chambers and Joseph Donofrio
The Commendation Award may be awarded to police division members who have performed in such manner as to bring pronounced credit upon himself or herself or the Police Division. Officers Chris Chambers and Joseph Donofrio are the award recipients for 2019. Both officers responded to theft reports, conducted investigations, and were able to identify a suspect within one day of the reports. We thank the officers for their quick and decisive actions that enhanced campus safety.

Citizen of the Year – Awarded to a citizen who has provided significant and valuable service to assist the University Police Division. Dr. Susan Moffatt-Bruce was at The Ohio State University Medical Center the day Westerville Police Officers Anthony Morelli and Eric Joering were killed in the line of duty. Dr. Moffatt-Bruce was the “glue” that held people together.  She expressed concern for the well-being of many family members, police officers, and staff. The doctor checked vitals, provided water and food, and was a liaison between other doctors and family members. Her thoughtful demeanor and attentiveness to those grieving proved to be helpful beyond words.